Tennessee circa 1971-74 William Eggleston
‘Filthy, rotten, rancid and maggot-ridden – then turned into a ready-to-eat meal’ The Guardian, August 30, 2003 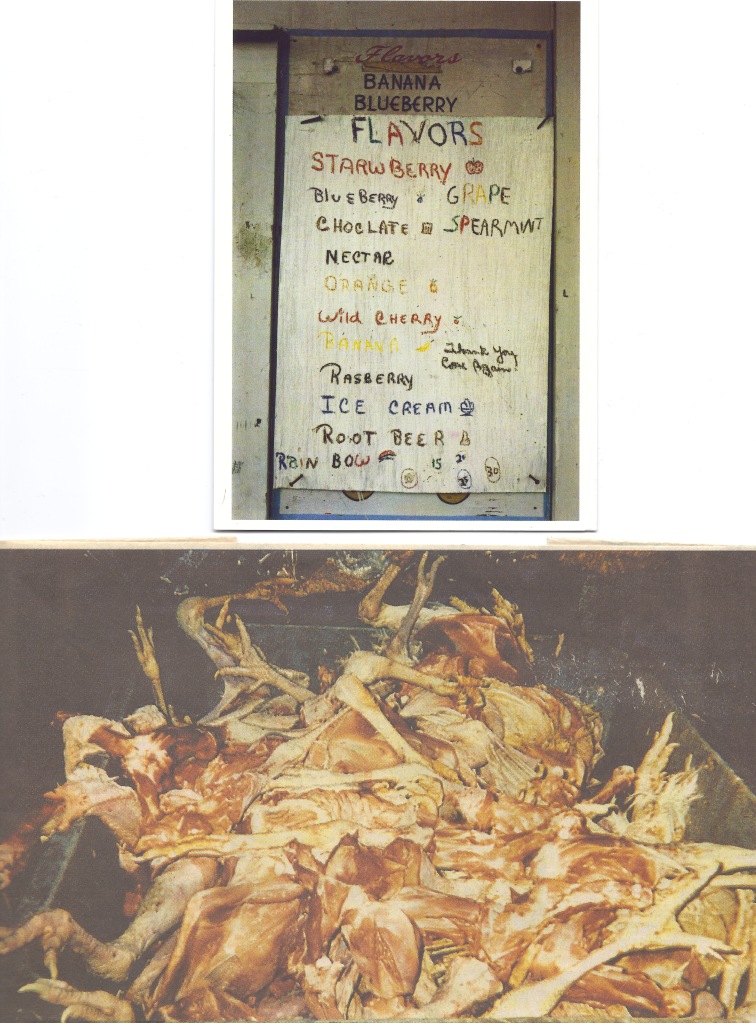 ‘Levi-Strauss has shown the importance of cooking, which is peculiar to man in the same manner as language.

Better yet, cooking is a language through which a society expresses itself. For man knows that the food he ingests in order to live will become assimilated into his being, will become himself.

There must be, therefore, a relationship between the idea he has formed of specific items of food and the image he has of himself and his place in the universe.

For just as the phonetic system of a
language retains only a few sounds a human being is capable of producing, so a community adopts a dietary regime by making a choice among all the possible foods.

By no means does any given individual eat everything; the mere fact that a thing is edible does not mean that it will be eaten.

By bringing to light the logic that informs these choices and the inter-relation among its constituent parts – in this case the various foods – we can outline the specifc characteristics of a society, just as we can define those of a language.’

Do you remember that you had a Braun in your restaurant? Albeit a big one, but that’s the sort of reduced size version which simply has that goblet on top.

And that is an essential ingredient in my daily life and very often I alternate really between a sort of muesli which is sitting here somewhere in this chaos.

There it is… Jordan, Jordan Natural Muesli – there is the last remnant. Now I had that yesterday with Swiss, dried, full cream milk. The milk reconstituted in that machine because one of the disadvantages of powdered milk is that you can’t really reconstitute it without a machine.

If you try with a spoon or a fork, yes, you get it… but it’s lumpy and only with a machine do you get it completely homogenised with water.

So, I had my homogenised, reconstituted Swiss powdered, full cream milk and the natural museli and that was my breakfast yesterday.

My breakfasts are pretty standard, they are almost always one or the other. And today it was the other. One egg, free-range – in that machine, together with some powdered, dried yeast, sometimes I use Yestamin, but sometimes I use the Holland and Barratt variety which is slightly cheaper, but every bit as good quality.

The next ingredient that went in is a clove of garlic. Again, the only way of homogenising a garlic clove so that it becomes creamy and you don’t get a concentrated lump, again, is for such a machine.

So, in that went. Then a certain amount of water and quite a large amount of (I can show it to you later when you move away from there) … I buy from Sainsbury’s a sort of tomato puree in a plasticised cardboard box which I find highly convenient because it’s vacuum-packed or something of the kind – it keeps for many
many months, doesn’t need refrigeration and you don’t have the problem of peeling the tomato and cutting out the woody bits.

It’s all there in pulp form so quite a lot of that went in and the machine was then switched on. The machine is by the way powered by wind and sun power, it doesn’t use mains electricity.

Uumm (the noise of the Braun starts) that (referring to the Braun) is in constant use, it is an essential ingredient of my life.

So, now that was all beaten up and while that was beating away, I add in olive oil, which you see here, mixed with a small amount of butter, perhaps twenty per cent butter, eighty per cent olive oil.

You see the canister behind you in the corner there, best Spanish virgin olive oil and that was sitting here in this frying pan and in that I fried two pieces of German style rogenbrod, rye bread, country bread if you like, but definitely a rye bread, not a wheat
bread.

A fairly heavy, dense, sauerliche, sourdough bread and these two pieces were fried in the olive oil, gently.

One of them was then broken in two and thrown into the machine with the egg mixture.

So the egg, the yeast, the tomato and garlic and one piece of rye bread were all homogenised into a cream.

That was then put into the frying pan and cooked after the olive oil had been taken out and the fried bread taken out.

So one piece of fried bread was eaten as fried bread as a sort of basis, a fundamenta (sic) foundation and sitting on top was the mixture of the egg with the other piece of creamed bread and the tomato and garlic and that was scrambled you see as a sort of scrambled egg.

And that was my breakfast.’

Section of an interview with Maurice Seddon speaking to Sandra
Cross and William English, Datchet Cottage, 2001 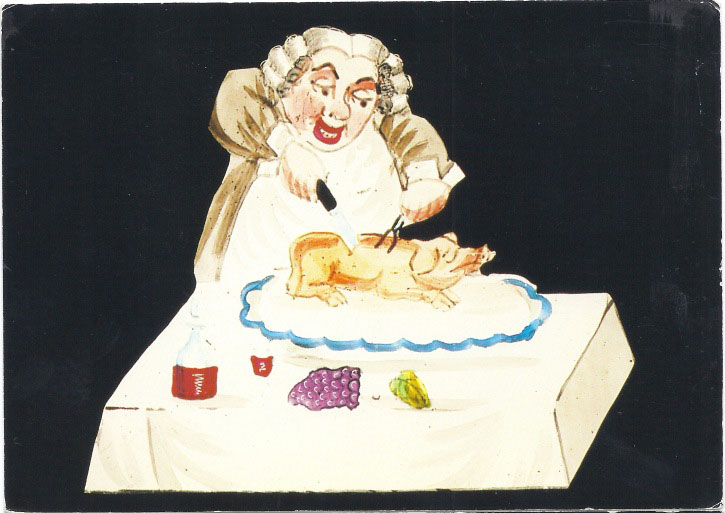 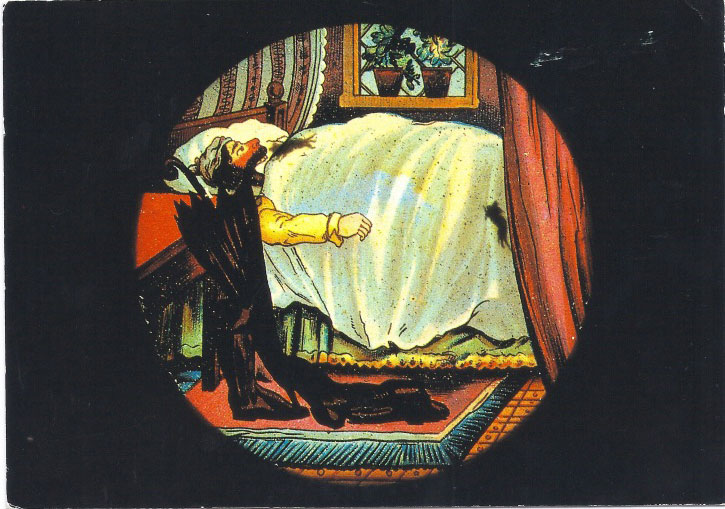 ‘I’ve been on the Atkins diet. I thought I ought to lose some weight because my trousers were getting too tight. So I decided to try it and I bought the books and it does seem to have some quite good science behind it regarding the action of insulin and glucose.

I didn’t completely get into the science but Atkins maintains that we can do without sugar completely and carbohydrates as well, as these foods seem to make people put on weight.

Anyway, I tried it and although the diet centres on protein and fat, I found I wasn’t actually eating any more of these things than I was before I started the diet and I was doing it fairly strictly for several weeks.

I didn’t make a special effort to eat more fat or fatty foods than I was eating before and I wouldn’t have wanted to.

I was eating more protein and less carbohydrates including certain vegetables and other foodstuffs, some of which the highest carbohydrate things I stopped eating altogether for several weeks.

After I got used to going without potatoes, which was a little bit more troublesome than I thought it would be simply because in England you have potatoes with everything.

There is a hole in the plate if you like – there’s no potatoes there!

So I’d start off with… and strangely enough, this didn’t become monotonous… pickled herrings, say two pickled herrings with some olives, say a tablespoon, a heaped tablespoon of olives and better quality olives, some are pretty rubbishy, Cypressa olives are quite nice in dill or chilli or whatever, either one of those.

And what else? A couple of slices of crispbread and one sliced tomato. That was it for breakfast.

I’ve tried various brands over the years as I have always liked them and now they are part of my Atkins diet.

Section of an interview with Hugh de la Cruz, London 2204 with
Sandra Cross and William English

Longer versions of these interviews are available as are other sound recordings.